Musicians, How to Prepare for the Unexpected!

Some of my favorite stories in rock come from bands who are suddenly confronted with the unexpected, and yet manage to rise to the occasion. The one that sticks out in my mind the most was a U2 concert I caught on TV from the mid-90s. Midway through the second set, Bono’s voice blows out entirely. They ended up having to cancel several shows.

But, there in the moment, with their frontman’s voice gone, what happens? Bono points at the audience and lifts his arms, and they start singing. The entire packed auditorium. And U2 proceeded to complete the entire show, with encores, sung by ten thousand voices and Bono whispering along.  It must have been incredible to be part of that live.

That’s the sort of thing that separates the superstars from the ordinary players in the music industry – the ability to creatively adapt to whatever happens and still give your crowd a great time!

Playing Off The Unexpected Like a Music Business Pro

Here are a few general things you can do to prepare for the unexpected!

There’s a lot of reasons you might be at a gig and suddenly lose access to your electric equipment, anything from a power failure to a roadie failure. Get together with your band and see what you’ve got that you could play with the lights out if you had to.

Sure, the fans would understand if you had to cancel a gig because the power’s gone, but wouldn’t it wow ’em if you instead busted out some a capella moves instead?

Prog metal legends Dream Theater used to have a neat trick where they would come out as their own opening act, “Nightmare Cinema,” with every member at someone else’s seat. The crowds loved it, and they were pretty good that way too.

Even besides preparing to pull off little tricks, learning another instrument can be great for bringing a band together and helping you really connect with how everyone adds to a group. If there’s always two of you who can drum competently or plunk out the bass line, it means sudden lineup disruptions can cause far less trouble.

Everyone wants to hear the fans screaming for a third encore. No one wants to realize they’re out of material when it happens. So, play around during rehearsals. Learn some favorite classic songs you might unexpectedly cover someday.

After all, in their day Queen could add an entire set of classic Rock & Roll and Motown standards to their show, when they wanted. There was never any chance they’d leave the crowd wanting more. 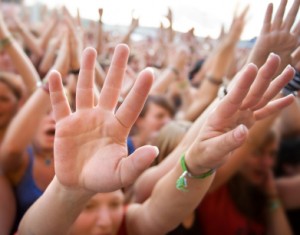 Whatever goes wrong, if all else fails, look for some way to get the audience involved. If they’re actively participating, you can turn virtually anything into part of the show. Whether it’s talking to them to kill time, starting singalongs, improvising call-and-response patter, or whatever… always try to keep the fans on their feet, with their tongues wagging and their hands waving.

After all, the golden rule of the music business has been and always will be: The Show Must Go On. (Speaking of Queen.) Nothing separates the true music business entertainers from the wannabes like their ability to take a disaster and turn it into spectacle!