If you’re looking for new ideas on how to promote your music, few things are better than attending a music festival!

Summer is here again, which means the music festival season is in full swing. Even getting your act into a smaller festival can bring you big rewards, and a small slot at one of the big shows can put you in front of a gigantic audience.

Even if you can’t play, simply attending means you’d have a chance to mingle or even slip some demos into the hands of people you meet. 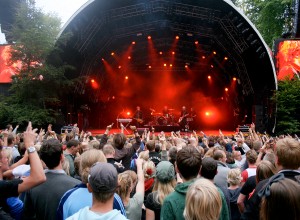 If the East Coast is your scene, Randall’s Island is where to be in early June. They’ve got a great lineup this year, including Jack White, The Strokes, and Vampire Weekend. They have fewer mega-acts this year, because they are focusing on up-and-coming East Coast indie bands, promising a great glimpse of stars to come.

If you’re too cool for Coachella, you’re probably going to Bonnaroo. They have a lineup as eclectic as ever, from Kanye to Elton John, along with Lauryn Hill, The Flaming Lips, Phoenix, and a lot of other great acts. Besides, Tennessee is vastly nicer to camp in than some desert.

While their lineup this year is a bit weak compared to last year, with Eminem, OutKast, and Kings of Leon headlining, Lollapalooza is virtually guaranteed to be a good time. It’s constantly proven itself to be among the best-managed music festivals, and that sort of reliability counts for something.

If EDM and other electronica are your thing, you want to be at TomorrowWorld. This global extension of the world-famous European show has an all-star lineup, including Tiësto and Armin van Buuren. It also boasts of an intentionally light-hearted and trippy atmosphere.

Looking for more ideas on how to promote your music? Just follow this blog for more advice!