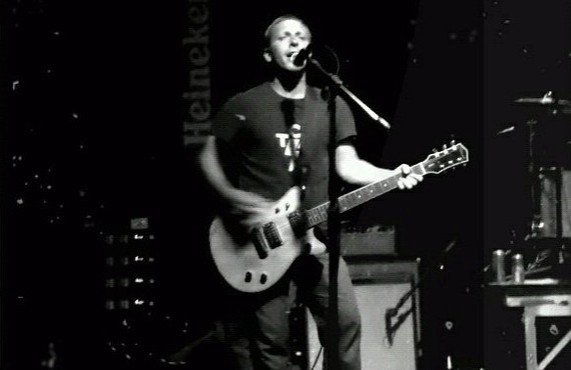 Ryan Ervin has one of those singular Nashville indie rock careers that winds through a handful of notable bands (Spider Virus, The Carter Administration, Hands Down Eugene, Teenage FBI) while maintaining a high output of quality recordings. (Full disclosure: Ryan, Todd Kemp, and I formed The Carter Administration in 1998 but I left in 2001 and they continued with Andy Willhite.) After over ten years together, The Carter Administration lost Andy Willhite but gained Sam Powers (Who Hit John, Superdrag, Guided By Voices). The new trio became Century Club and released an interesting batch of recordings. The last two of these provided the launching pad for The Minor Toughs.

With the members of Century Club working separately on songs, Ryan stumbled into a great way of working. He gathered the band each year and recorded an EP of songs he had written and some choice covers. The first two EPs — Keep It In The Fairway and Dazed and Defused — were released under the Century Club name. Those set the stage for The Minor Toughs first two releases — One For The Sun and last year’s brief but shining Summer of ‘77.

I spoke with Ryan about being a solo guy with a band name who often does it all himself.

For the past four years, you’ve had a pretty regular recording and releasing schedule, putting out an EP. What do you like about doing an EP solo as opposed to a band doing an LP?

I’ve been lucky enough to be in bands with very talented friends, and exchanging ideas with band mates is part of what makes being in a band so rewarding. It’s also what can make being in a band so frustrating at times. When I make records by myself, I get to make immediate and final decisions about songwriting, arranging, overdubs, mixing, mastering, artwork, etc. I don’t ever have to defer, compromise, or even ask anyone else’s opinion. It is an extremely efficient process. I’ve worked with Jeremy (Ferguson, Battle Tapes Studio) a lot over the years, and we work very well — and very quickly — together. After being in bands for twenty years, that really appeals to me. The downside is that I am not the most creative bass player, and my drumming is very basic. There are plenty of times when I think my songs would be improved by some outside ideas, but the process would take so much longer. I’m okay with that trade-off.

I record EPs instead of LPs because it would take me twice as long to come up with enough songs. It allows me to get music out quickly instead of waiting around for more songs to come. I get bored easily. I’m extremely impatient with the process, and I hate sitting on music that’s finished.

I’ve played in a lot of bands with a lot of different people, and I feel like through all that I’ve learned a lot about what goes into making a good song and recording

When you know you’re approaching recording time, how do you decide which songs to include?

To be perfectly honest, I just record songs that I have ready at the time. There’s never any thematic line running through the records, it really comes down to whatever is there and ready to go. Usually that includes a couple of new songs, an old song that may have never been recorded or fell through the cracks, plus a cover of a favorite song.

For Summer of ’77, you recorded a version of “Don’t Mess With Tennessee” by your frequent bandmate Todd Kemp. How’d you pick that song to include as one of only 3 on the EP?

I really wanted to do a super melodic upbeat Tom Petty-styled rock song, but I didn’t have one at the time. I thought, “Hey, I’ll take ‘Tennessee’ and make it sound like Tom Petty!” It’s one of my favorite songs of Todd’s. The original is more melancholy, slower, and has a lot of missing beats. I just made it a straight ahead, sunny rock tune, but it’s still a really sad song.

Despite the fact that The Minor Toughs are essentially just you, the recordings have a real band feel. How do you accomplish that?

I appreciate you saying that, but I really don’t know. I’m a lifelong super fan of rock music and I’ve played in a lot of bands with a lot of different people, and I feel like through all that I’ve learned a lot about what goes into making a good song and recording. I just make sure all the parts fit together before I get into the studio, and that the songs are dynamic and I get a good feeling when it comes back over the speakers.

Some songs I will ask Todd (Kemp) to come in and play drums, because I need a real drummer playing real drum parts. He and I have played together for 20 years, so that’s why those songs naturally sound like a band. I just give him a vague idea of what I want, and then he plays it either exactly like — or better than — I imagined it.

How did you choose Bandcamp as the home of your music? Do you list on iTunes / Amazon / Google as well?

I chose Bandcamp because it’s convenient. It’s easy to upload music and artwork and it’s easy to design the page. I don’t put the music anywhere else, basically because I don’t see the need to or have the desire to. I suppose if I were trying to really sell something it would make sense, but there’s already too much music out there for people to wade through. Bandcamp is just the perfect outlet for what I’m doing. There’s already too much music out there to wade through.

You seem to “spring” your releases on the public. Do you give any thought to release dates or just put it out when it’s done? And why?

I don’t put any thought into it whatsoever. For me, when it’s done, it’s ready to be heard. I usually post an album as soon as I get the finished master. It was always so hard for me in the past when the bands I was in would record. It seemed like after you were done recording, you’d have to sit around for a few weeks and wait for mixes, then sit around and wait for masters, all the while having to listen to 500 different versions of every song and debate about which one was the best. That whole deal was so stressful and sucked the fun out of recording for me, and I think my insistence on working quickly and putting things out immediately is just a reaction against all of that.

Any plans to put together a band to play The Minor Toughs songs live?

I’ve talked with Todd and Sam about doing some of those songs with the Century Club lineup, but we haven’t solidified a date yet. So I’m going to say…probably.

Summer of ’77 is available on Bandcamp.