In this post about industry professionals, meet elizabeth!, a vocalist, trombonist, 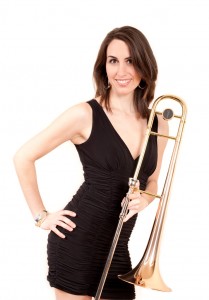 songwriter and educator newly based in Los Angeles, CA. Originally from Vermont, she studied neuroscience at Harvard before moving to NYC to play, tour, and record with jazz musicians (Matt Wilson), indie rockers (St. Vincent), pop stars (Michael Bolton) and more. Her new album of original jazzy pop tunes, Brainchildren, will be released in November 2011 on Canopy Jazz.

Q. What led you to the trombone?

A. Who doesn’t love the trombone?! My father is a bass player and trombone player, so I grew up around it… there are some cute photos of me as a kid attempting to blow some notes. I took piano lessons for several years before it was time to pick a band instrument, and when they came around to my 5th grade class to demonstrate the options, I wanted to find something other than the trombone to fall in love with. But it just picked me, I guess! It just felt right to me. It’s very vocal, so it’s almost like singing. I still love it, so I suppose it was meant to be!

Q. What is it like being a woman in a male dominated industry?

A. A lot of the time, I don’t think about it. But there are always things that crop up to remind me that we are a minority in this business… like walking into a room full of men. Many of them are respectful and fair, but there are some who insist on making a big deal out of the gender difference. Even subtle things contribute to this, like someone saying “what a pretty girl with a big horn” or something to that effect. Can you imagine if they said that to a guy who walked in the room? What this amounts to is that often women need to work really hard to prove themselves equal. That means playing well and being professional….just what you’d expect from any musician.

As I said, though, many men I work with are mature and professional and I don’t think about it! There are also a ton of great female musicians, and as I meet more and more of them, it is so inspiring!

Q. What are some major challenges you’ve faced as a touring musician?

A. It is easy to get into a “tour bubble” and be in a tiny world with the people you’re touring with. One of the great things about living with and traveling with the people you’re working with is that you become close friends as well as colleagues. That can be a lot of fun, but it is important to maintain your friendships and relationships and contacts back home while you’re on the road.

Of course, another major challenge is getting enough sleep! Performing gives me energy, but it also takes it! I often need time to wind down from a gig, no matter how late it is. But I know that lobby call is coming early, so I have to be disciplined enough to get the rest I need.

Q. What advice would you give to other women interested in pursuing Jazz performance as a career?

A. Network! And learn about the ins and outs of music itself, and of the music business. The men who run the business will respect you if you understand what’s happening around you, and if you know how to advocate for yourself and stick up for yourself.

That said, those can be tiring things! Surround yourself with people who love you and believe in you, and just keep at it!

Q. How do you get young women inspired by jazz music?

A. I think it’s important for young women to see positive, strong female role models in music. Boys and men have taken – and do take – up a lot of stage time in school, so I love going into elementary and middle and high schools to do workshops and assemblies about jazz. My band is often made up of male musicians, but I am leading the band, and I am leading the workshop or assembly. I want to show those girls – and boys! – and teachers! – that it is not only possible but normal for a woman to be up on stage, playing and singing and talking.

Jazz has a powerful message for me, which is that to do it well, you take who you are and what you know and use that to make music. It is very personal, and it works best if everyone involved is really present in the moment. Plus it’s really fun! I hope that I can inspire young women to be their best and most present selves, whether or not they ever become professional musicians.

Tell us what you think! How has jazz music impacted your life?