How to Set Prices for Your Merchandise

The album is released, the t-shirts are printed and it’s time to start pricing all your merchandise. This is an important aspect of being an independent artist. You are a business owner, after all, and just like any store you’ve ever purchased an item from, someone has to set all those prices. As a DIY act, you’re the owner, business manager and employee rolled into one, so get to work. Here are some tips on pricing your product, from the merch table at live shows to online distribution.

Don’t charge more than what the market will bear
No, we don’t mean teddy or Grizzly bears. In this case, the word bear means support. The market will only support items priced competitively with similar items. It used to be that the most common standard price for independent acts’ CDs at gigs was $15. If you are a headlining act and drawing big crowds, you can still get away with this, but most unsigned bands tend to charge 10 bucks in these days of economic downturn and dwindling CD sales as more and more fans prefer to download albums.

If you are a support act on a bill, it’s a good idea to price your discs lower that what the headlining act is charging, but not too low that it seems like cut-out bin prices.
Concerning t-shirts and other merch, these items are traditionally money makers for artists that fans are willing to pay a little extra for. Pricing depends on how much you spent on the t-shirts etc. A mark-up of 20 to 30 percent of your cost is reasonable. Try pricing at the highest point you believe reasonable and adjust accordingly depending on how the product moves.

For digital downloads, it’s a good idea not to charge more than a dollar a track. For album downloads, set the price at least a couple of dollars cheaper than a physical copy of the CD costs. 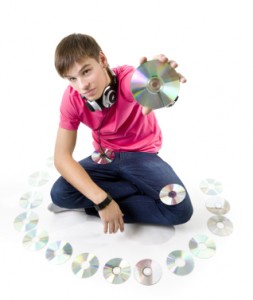 A newer tactic for pricing in the music world is to let fans pay what they want for your music. It may sound counter-intuitive, even dumb, to some, but there’s plenty of proof that it works. Radiohead released an album allowing fans to pay any price they wanted. But even before Radiohead did it, smaller indie acts were having success with this model, especially at live shows.

Why does it work? Because it becomes less about a product and more about an involved process. Fans want to feel like they are part of something; letting them set their own price makes them feel empowered as well as part of a community of like-minded people. For all the cash-strapped fans who can only afford to pay a few bucks (people who otherwise probably wouldn’t have purchased the CD and may have even pirated it later on), we’ve heard reports of many others handing over a twenty and not asking for any change. This model is a good way to excite your existing fan base and to discover that people really do want to support indie music and musicians.

How to Optimize Your YouTube Music Videos for Search Engines

SEO: Why Tagging is Important