Music Lingo That is a Must Know

As a particularly abrasive advertisement liked to remind me incessantly some years ago, people judge you by the way you talk. It sucks, but that’s life. If you’re going to make it in the music business, learning a bit of the local patois is practically a necessity for being taken seriously in negotiations.

Some Music Business Lingo You Should Know

A&R: Artist and Repertoire – These are your handlers and talent scouts, who act as the liaison between you and larger record labels. Besides communications, their main job is to help mold you into what the label hopes will sell more tracks. 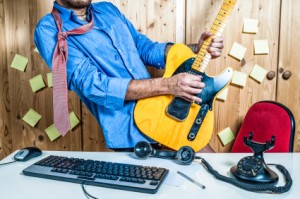 Clearance: Granting the rights to use a song in another work, such as a film’s soundtrack or an advertisement.

360 Deal – With more artists shying away from huge advances that create large debts to repay, as well as long-term contractual obligations, the 360 Deal is becoming more popular. In short, in return for not locking away all your rights, they take a cut of all your music’s various revenue streams, such as merch and concert profits.

Replication – The music business term for the process of manufacturing physical albums, regardless of the media they’re shipping on.

Cross-Collateralize – Under a cross-collateralizing plan, all of your various advances from a record label go into one account, and the advance on one album can be paid off by profits from a later release. Which is to say, it allows them to keep loaning you more money than you still have to find a way to pay them back.

Exploit – Seeking to make money off of your own music.

One Sheet – A single page advertisement, used for promotion. Movie posters and boxing cards are also one sheets and work the same way.

Library Music – For some artists looking to make some quick cash, music can be bundled in off-the-shelf packages for people looking for tracks to drop into their own productions without negotiating clearance directly.