How does SongCast Define Good Lyrics? 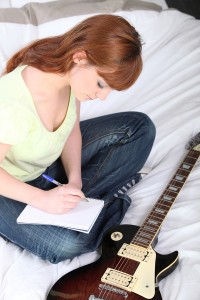 When you’re looking for new ideas on how to sell music, audience appeal is one of the most important factors. While the debate over the importance of lyrics/singing relative to the soundscape will probably never end, it’s undeniable that your lyrics have a huge impact on how your audience reacts to your music.

So what makes for good lyrics, anyway?

Tips On How To Sell Music: What Makes Great Lyrics?

1 – They relate to your audience.

While there are exceptions, as a rule, people tend to listen to music that reflects their own worldview in some way or another. This is one thing that initially decides which fans group around an artist: He or she is presenting a view on things that certain listeners decide they agree with.

So as your fanbase grows, consider what sorts of ideas they’ll want to hear about. It’s fine to have your own message too, but just keep in mind (as Kanye painfully learned last year) that if your message is too “out there,” folks just plain won’t listen.

Songs are meant to be sung, and a smart musician wants fans wandering around humming their tracks. A guide to writing memorable lyrics would just be an intro to poetry, but they should have at least some of the following qualities:

Now, of course, this can ultimately range from The Police working in Nabokov references, to Scandinavian metalheads calling for Ragnarok. The key is to have a hook or gimmick that your lyrics revolve around.

Even if you’re talking about a specific topic or group, try not to solely preach to the choir. Lyrics in the form of “why everyone except us sucks” may have great appeal to a few, but they tend to alienate a larger audience.

When selling music online, always keep in mind that virtually anyone may stumble upon you, so try not to drive customers away.