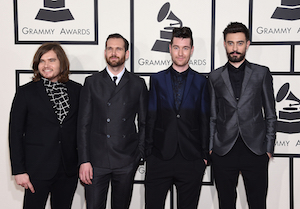 Today is Bastille Day and also the birthday of singer-songwriter Dan Smith, who decided to name his band after this hallmark day. You guessed it—Bastille. This month, we’d like to see what makes this band so successful and you might garner some musical inspiration from these English rockers.

Bastille formed in 2010, and they independently released a debut single as well as a self-released EP before signing to Virgin Records. Bad Blood, their first studio-produced album, skyrocketed to Number One on the UK Albums Chart after its release in March 2013.

So, what can you learn from this group? We’ve got some musical inspiration for you.

They know how to utilize social media to get their music out there.

When Bastille first started recording, they released singles in 2010 that included “Icarus” and “Flaws.” Then, the EP Laura Palmer came out in 2010 and they decided to release a few more singles. They promoted the songs on sites like MySpace and YouTube. Of course, these days it’s important to consider Facebook, Instagram, Twitter and other sites for promoting your band, but social media certainly boosts your views and shares.

They’ve got an interesting blend of sounds.

Rock, R&B, alternative and EDM are all within their repertoire.

Aside from their namesake (the start of the French Revolution), Bastille’s singles “Pompeii” and their earlier single “Icarus” are based right out of the history books. Pompeii was a city famously buried in volcanic ash after Mount Vesuvius erupted in 79 A.D., while Icarus was a character in Greek mythology who ignored his father’s advice and his over-ambition ended up killing him. You might consider taking some pages out of history for your next single!

They get musical inspiration from other artists.

Bastille has covered music by Frank Ocean, TLC, City High and even Miley Cyrus. Don’t write off covering other artists—that’s just another way to get a wider fan base!

Where do you find music inspiration? Let us know in the comments below, and visit our SongCast blog for more inspiration tips!