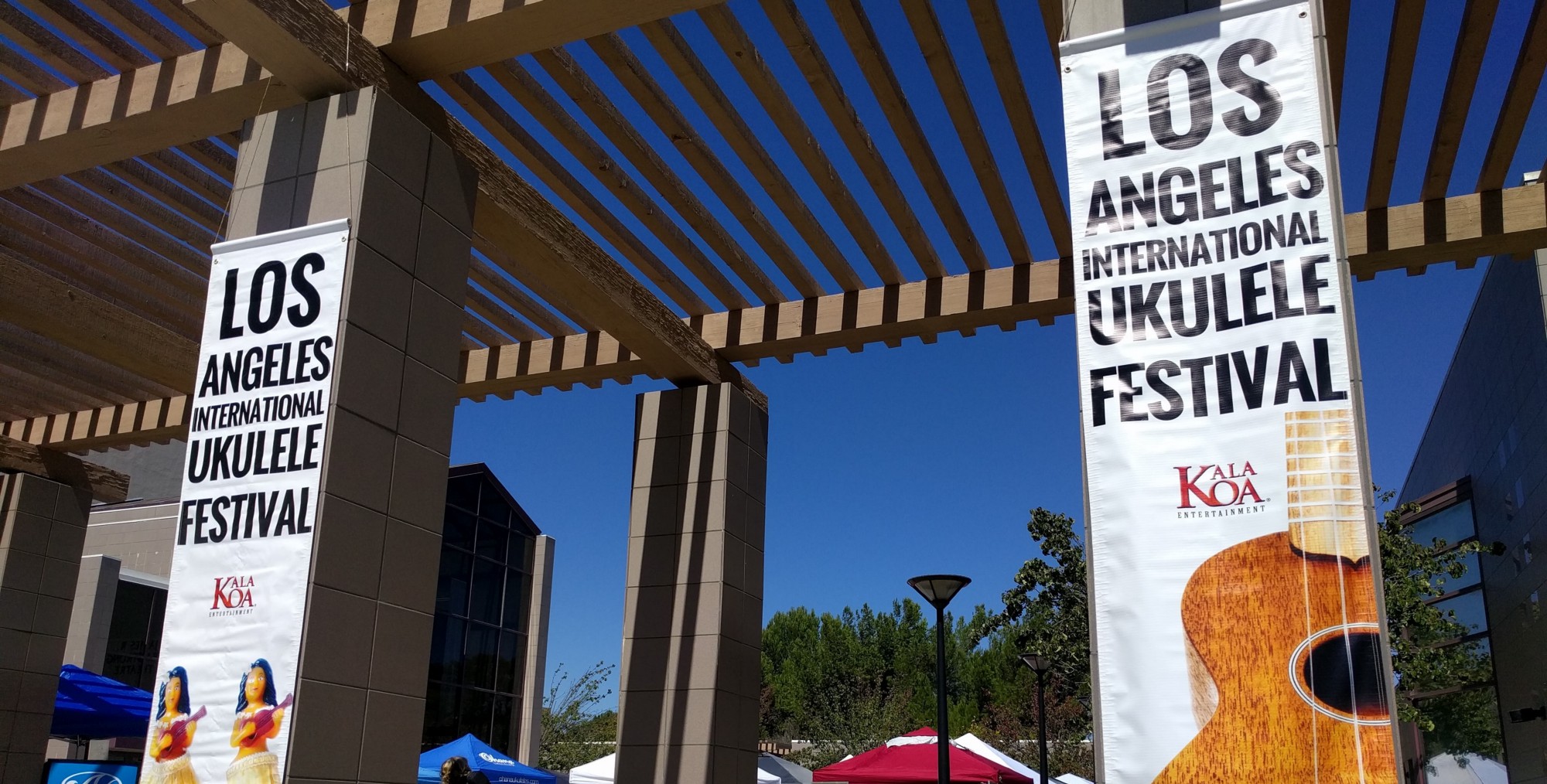 There Were No Hipsters at the Ukulele Festival I Attended

I play a little ukulele. (That’s a ukulele joke.) Last weekend, I attended the second annual Los Angeles International Ukulele Festival with a uke-playing friend. When I mentioned this to other friends, I got the same reply: you hipster. But I’m here to assure you: there were no hipsters present. Like the open mics I wrote about last week, the vibe at the fest would have killed any pretension of “cool.” And here’s why that’s great…

Slandered as a hipster instrument, the ukulele is far too dorky ever to sustain the kind of cool necessary to attract hipsters en masse to a festival. Instead the crowd was a mix of — and I mean this in the nicest way — fellow dorks. Running all day on Saturday, the Festival does a great job of interspersing workshops with outdoor performances and a ukulele market. Attend a class for an hour; sit outside for a performance; attend another class; check out vintage, custom, and new ukuleles from the merchants; grab lunch at the taco truck; practice pronouncing it “ooo-koo-lay-lay”; have fun — that’s the schedule.

There are many things that fascinate me — a guitarist — about the ukulele. One is an instruction that my oft-cited, resident music professor friend Todd Kemp told me long ago: you need to be aware of the chord voicings that you’re using. On guitar, where I like to throw in chunky 2nd inversions frequently, I practice that lesson with minimalism: if I’m not playing a big open major or minor chord, I usually don’t hit more than three strings. But on guitar, if I wanted, I could usually play those voicings all over the neck, wherever I needed.

On ukulele — highlighted by Sarah Maisel in my first workshop of the festival — those voicings are often even more meaningful because you’re working with only four strings, have a tiny neck, and (for most of us) have a high G string below the lowest string (a C). You’re choosing voicings based on a limited number of options and it forces you to think about it. I can’t just chunk away.

In that first workshop, there was enough information to tease out into many classes on voicings, substitutions, and chord changes. It was a cool exercise in showing how little choices can expand our musical palette. Instead of looking at it as though we have infinite choices, it was a lesson in meaningful, restricted choices.

In my second workshop — Improvising Over Chord Changes — there were far too many of us to focus on restricting choices. Instead, Abe Lagrimas, Jr. gave us a limited palette (Bb major scale) and a variety of chord changes and walked us through the basics of improvisation using those tools. The practice of those exercises, of course, involved 50 people noodling through the scale all at once. At times it was cacophonous, but it was another example of how much we can spin from a limited selection.

My interest in ukulele is driven in part by my minimalism. I like working towards the fewest tools necessary. It’s not for everyone. Unlike guitar, on which virtually any style of music can be played, the ukulele ties your hands. Popular exponents of the instrument often wish to demonstrate how versatile the instrument is by adapting well-known songs to ukulele. Sometimes these adaptations are wonderful. But I like hearing the ukulele qua ukulele. I like the voice of it.

This was my first time attending but it was so enjoyable that next year, I won’t hesitate to buy my tickets, starch my jodhpurs, fill my zahato with a delicious IPA they brew in the converted Airstream in my neighborhood, wax my mustache, and cycle my velocipede to the festival. But like I said, there are no hipsters present.