How Musicians Can Overcome Stage Fright

From the local open mic night to the big festival stages, all performers get stage fright at 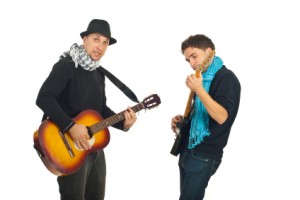 one time or another. Whether you’re just starting out, or an experienced pro with a following, here are some tips to help calm the nerves and deliver a dynamite live music performance.

Don’t try to please everyone. It can’t be done. But you can try and play for just one person. Not in a creepy I’m-staring-intently-at-you way, but in your heart. It could be a loved one in the crowd or someone who is not even there, such as a beloved deceased relative. Imagine they are there and perform in a way that would make them smile. This technique worked well in another creative medium for author Kurt Vonnegut, who once claimed that he wrote all of his stories for his deceased sister. If he didn’t think she would like it, he would strike it. He didn’t care what anyone else thought but her. This sort of focus brings out true emotional power on a deeply personal level and can serve a musician well when performing.

Draw an imaginary three-foot circle around you

Multi-platinum singer/songwriter John Mayer once told an interviewer he used this method to cure stage fright in his early days as a performer. The idea is to draw an imaginary three-foot circle around yourself once you get onstage. That’s your space, no one can intrude on it and you can do whatever you want inside it. Don’t think about what goes on outside it. You’re inside a bubble no one can penetrate. Now, go ahead and do what you would do during your best rehearsal moments, alone in your room. If you’re the type of performer who moves around a lot, expand the size of your circle.

Bring something from home to help you feel comfortable

A common practice to help ease the nerves — even for those at the top of the performing pyramid — is to bring a special item from home on stage. A bedroom throw rug, a lamp on a nightstand or some personal pictures might do. Or your dog, if it’s a pet-friendly, outdoor venue. Don’t laugh. It’s been done many times.

The official motto of the Boy Scouts of America works well for musicians too. Being prepared means practice, practice, practice, until you can play the songs in your sleep. Practice breeds confidence. Confidence leads to less stage fright. If you ignore every other tip presented here, heed this one. Your audience will thank you later.

A mistake many musicians fretting over stage fright make is to liquor up beforehand. Sure, a beer or a shot may loosen you up a bit, but getting drunk, or even tipsy, could lead to a disastrous performance, or a lack of energy halfway through the set. Act like a professional, even if it’s a non-paying gig.