How to Get Your Music Played on College Radio Stations

If you don’t think college radio is worth your time as a performing musical act, think again. It was college radio where Nirvana first gained the exposure that helped the Seattle-based band break out into mainstream success and transform the face of popular music. And you don’t have to be an indie-alternative act to succeed in this market. Unlike commercial radio, college radio stations are known for the diversity of their music programming, meaning you can hear a multitude of styles, from up-and-coming old-fashioned Appalachian string bands to mash-up genres no one has thought to put labels on yet. In short, college radio is usually where the next non-American Idol first gains a following. Here are some tips to help you break into this wide open market.

Start with local colleges
College radio stations are staffed by students. This means that the deejays and music programmers are more accessible, maybe even eager to hear directly from acts who don’t have representation. Find out who the music programmer or genre-specific deejay is at your local left-of-the-dial station and get in touch. Most public and college stations make a point featuring local acts in their programming, especially if they are active on the local scene.

Play at campus events
Approach the student activities director at colleges in your area and offer your services. This person wil be a student responsible for booking multiple events around campus. A 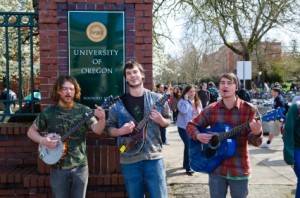 radio station at any college will be more inclined to play your music if you are actually performing at an on-campus event. One huge bonus of playing campus gigs: the pay is usually VERY good, because universities have big budgets to work with. Never play a campus event for free, unless the exposure opportunity is too good to pass up. You could also join NACA (National Association of Campus Activities) but it can be pricey and doesn’t lead directly to college radio air play, though it can lead to some high-paying gigs.

Send them your music
While this bit of advice doesn’t work for corporate commercial radio, where your CD will end up in the slush pile, college stations readily accept unsolicited submissions and even listen to them. Be sure to include the name of the specialty show where you think your music will fit.

Get involved with the CMJ Network
Formerly known as the “College Music Journal,” CMJ Network is now a catch-all name for the 21st-century incarnation of this organization that has been covering trending music on college and non-commercial stations since the late 1970s. Along with the weekly “CMJ New Music Report” trade publication, they are also the folks behind the CMJ Music Marathon, an annual music conference in NYC, the place to network with those who can get you played on college radio. Learn more at www.cmj.com.