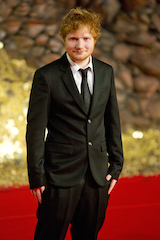 Right now, Ed Sheeran is one of the biggest names in music, and with good reason.  With a beautiful voice, highly poetic lyrics, and a wide range of styles, Sheeran has the makings of an all-time great.

What can indie musicians learn from Ed Sheeran?  He’s a great illustration of how to succeed in modern music!

If you need more evidence that musical success requires a lot of persistence, Ed Sheeran’s early career is great proof.  He played plenty of tiny gigs, and eventually met a few other up-and-comers on the British music scene.  Then, he packed up and moved to LA, and started doing the rounds of open mic nights.

Then he got noticed by Jamie Foxx, at an open-mic gig, and the result was a wave of new industry contacts, including Sir Elton John.  Within a year, he had a self-produced EP with a load of guest stars and a single that reached #2 on iTunes without any label backing.

One thing that immediately struck me about his hit Thinking Out Loud is its video:  It’s a single ballroom ballet sequence, fully choreographed and planned out.  It’s sexy, but in a very classy way, especially their wardrobe.  The result is a highly eye-grabbing video that’s notable largely for its simplicity and ease of style.

Despite his relative youth on the music scene, Ed has already become a high-profile fundraiser, working with multiple groups on charity gigs for good causes.  This is pretty much a win-win scenario.  He gets great press, while doing actual good for the less-fortunate.

This is something that a lot of indie musicians could do.  Everyone’s local area has people in need.  Think about organizing your own fundraiser, cross-promoting with other local bands.  It’s a great project, it attracts attention, and it builds more bridges in the community.

Or, have you already done a local charity gig?  How’d it go?