To Remix or Not To Remix

As an indie artist, often, it’s hard to get noticed. You write and you create and you perform but it seems like nothing’s catching on. There could be a number of reasons for this: perhaps you need to step up your game on stage, or maybe you need to rethink some of your song arrangements or consider playing with a new guitarist. But after you’ve made adjustments, what else can you do to get fans to take note and to discover you? One really great way is to consider remixing a popular song.

What exactly is a remix? Wikipedia says it’s an alternative version of a recorded song, 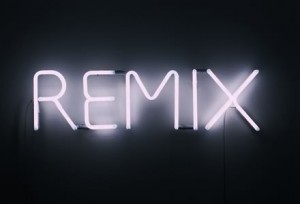 made from an original version. A remixer uses audio mixing to compose an alternate recording of a song, by adding or subtracting elements, or changing the equalization, dynamics, pitch, tempo, playing time, or almost any other aspect of the various musical components. Some remixes involve substantial changes to the arrangement of a recorded work, but many are harmonic, such as creating a “vocal up” version of a song that emphasizes the lead singer’s voice. Contemporary remixes are often produced in a Digital Audio Workstation (DAW), which allow producers to reorganize tracks and apply various effects.

And here’s why remixing might help you get noticed:

1. Target an audience: If you’re interested in getting the attention of a particular artist’s fans, a remix might do the trick. When an artist’s fan searches for a track by name, your remix can be easily discovered in search results. Australian musician Gotye’s song “Somebody That I Used To Know” has been remixed to death, see this blog post for remixes.

2. YouTube discovery: If you create a YouTube video to accompany your remix, the same idea holds true– it makes you easier to discover. But that means you should choose wisely when decided on a song. Pick an artist that you like, and whose fan base you’re interested in. And make sure your video is professional, engaging and something that potential fans would want to watch and share.

3. Hype Machine: The website Hype Machine keeps track of what music bloggers write about, by handpicking a set of influential music blogs and sharing their stories. Hype Machine shares music, and it’s worth noting that often times remixes skyrocket past original songs in terms of buzz.

Bottom line is this: even if your remix doesn’t make you a superstar, and doesn’t get the attention of the biggest producer out there, it always makes for great content on your social media pages and gives your existing fans something to talk about. And the hope is that you’ll gain some new fans out of it, as well.

Tell us what you think! Have you remixed a song? Was it helpful in gaining new fans?
The SongCast Crew