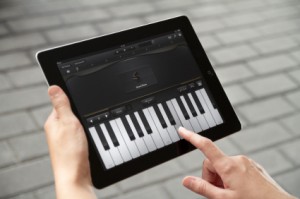 Last March the third generation iPad was released to great fanfare, with many features that can benefit the independent musician. Initially, the new units shipped with the iOS 5.1 operating system, then iOS 6 was released in September, making the new iPad compatible with the oft-maligned Siri. The new iPad offers faster processing speeds and the visually pleasing Retina display, as well as a 5 megapixel iSight camera and the ability to record high-def video with audio, the latter being a nice feature for acts wanting to make quick live videos to share with fans via YouTube, their website or social networking sites.

For accessories, musicians will be interested in paying extra for the Apple in-ear headphones with a remote and a mic right on the cable (cost: $79). This in-ear device is much more suitable for recording and mixing music on an iPad than the standard Apple “ear buds.” Speaking of making music, let’s get to the apps. The new iPad comes pre-installed with iPad Music. That’s not saying much, as it’s pretty standard stuff and more for playing music than creating it, but the app store has plenty to offer. DJs and purveyors of electronic music have the djay ($4.99) and Korg’s ELECTRIBE ($19.99) apps, both of which have extensive features. For creating rhythm and beats and having fun with a virtual drum kit, there’s DM1 — The Drum Machine ($7.99). Guitarists and bassists have AmpliTube ($19.99) at their disposal for multiple effects and recording with the equivalent of a massive rig at the fingertips.

And let’s not forget the GarageBand app ($4.99). It’s still one of the best ways to create music via computer and it works better than ever on the new iPad. If you have a second generation iPad, you can do pretty much anything you can on the new iPad as far as creating music, but the bells and whistles look and sound a bit better and respond a little faster.

One of the most anticipated new developments for iPad music makers hasn’t actually happened yet: the coming of Audiobus. Audiobus, when it’s released, will allow users to do something they haven’t been able to do on Apple devices before: use multiple musical apps at once to create a singular piece of music. Developers say Audiobus will cost less than $10 and the release date, while not yet set, should be sometime in the near future. So, start making great music with your new iPad, and when Audiobus comes along it will be a lot easier, if we’re to believe all the pre-release hype. Maybe you could ask Siri when Audiobus will be available…that is, if you trust her enough.