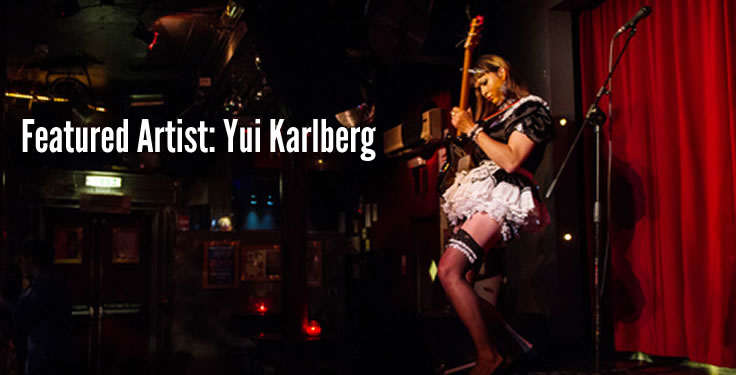 We caught up with SongCast artist Yui Karlberg.  Find out what inspires her, how she connects with new fans online and in person, and why you never know when you might need to have one of your CDs with you to sell at a moment’s notice.

Well, my first musical memory would be listening to ‘Heaven Is A Place on Earth’ by Berlinda Carlisle on Swedish radio (obviously in Sweden before I moved to England).  I must have been 5 years old or around that time.   The first time I remember anyone doing anything musical was watching my stepdad getting out his acoustic and singing Beatles songs to us when we were kids.

There are many artists that inspire me.  However, when I recorded my debut album ‘Yui’ back in March 2012, I had just discovered Bon Iver and I fell in love with his style of singing, and I still sing in falsetto now.  For my 2nd album ‘Beauty Within The Beast’ and my upcoming third ‘Touching the Rainbow’, artists like Rihanna, Lady Gaga, and even Chase & Status had inspired me. 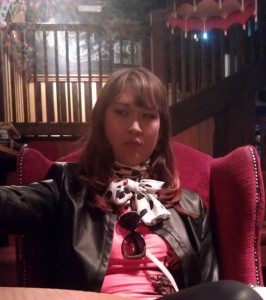 My latest album is called ‘Beauty Within The Beast’. It’s mainly an electro pop album but there are eclectic songs on there too. My songs are about my life in general but because I use the pronoun ‘she’ instead of ‘I’ it could be about anyone.

It’s my second album and it’s selling a lot more than my debut. I’m very content and confident with this album. However, I have just finished recording my third album ‘Touching the Rainbow’ and there are a few music videos of the songs from that album up on YouTube. Most of them already have over 100 views.

Well, I think this goes about the same for anyone….anything by CRAZY FROG!

I think people should concentrate more on listening to songs or albums by local unsigned artists. We need as much exposure and recognition as possible.

In the Bournemouth area for example, there is Empire Affair, Dan R Gordon, Beth Johnstone and Krista Green. They are my top faves.

My profession would definitely be my art as I have been an artist since I was little and I do have a bachelor degree in fine art too. I hope to have some paintings exhibited in London in November but am quite busy with recording, rehearsing and gigging at the moment.

Tell us more about your local scene.  Where do you like to perform?  What kind of audience comes out to shows?  Where is one place near you that you would like to perform, and why?

The Bournemouth live music scene has a lot of ambitious musicians and that’s what’s attracted me to Bournemouth ever since I witnessed Si Genaro’s ‘Revolving Doors’ open mic night at O’Neills.

I love performing there because I have met so many new friends there and we are really close now. And even if I don’t want to perform, I still like going there to socialise and catch up aswell as social networking with other musicians.

I love open mic nights because I don’t just get the chance to perform but I also get asked to play gigs in the area as well as selling my CDs and getting more exposure.

I would say it’s mainly students who comes out to shows as well as people who are after a good night of live music after work as well as musicians obviously.

I’m not really sure where else I would like to perform as I have performed at most of the venues now even at the O2 Academy thanks to TalentCall…. There is only one place left and that would have to be Mr.Kyps…and one day…the BIC. I love big stages and my favorite stage I played on was at this year’s Bournemouth Thai Food Festival in The Square. I felt like I was at Glasto but without the fields. That’s another place I would like to perform at one day!

Oh my god! I have so many! I don’t know where to start. But I guess ‘my’ perfect live experience would be one that I have learnt a lot from. It’s actually uploaded on YouTube and it still makes me laugh every time. Basically, this happened at a variety show on Battersea Barge in London recently.

I was kind of hoping that the sound guys would have set up my synthesizer, made sure everything was going through loop pedal and so on. But no, they hadn’t. The entire room was packed full of people too and I was even being filmed.

I panicked for a second then thought…I need to say something…anything will do…while I’m setting up.

Then this random comedy act came out of me and I was making the whole room laugh. I was just taking the piss out of myself mostly and they loved it!

And then I played the song and got a very loud round of applause afterwards as well as compliments. A night I will never forget!

Oh, I love this question! Basically, I wasn’t really getting as much exposure as I am now with my debut album…and before I went electro pop, I looked at the music industry from the business side of it.

Most of what we hear on the radio is electronic music nowadays and video games have always been popular too.

I then thought…I would rather have my songs played in a club than in a restaurant or bar…so then my second album was released and my visions did not fail me.

I’ve been getting a lot more radio play now as well as more exposure and success in various proportions.

I would have to say that to begin with, it’s my transitioning from male to female which is sometimes a very difficult journey especially mentally. And without music or art in my life, I have no idea where I would be now and I wouldn’t even want to know.

Everyone knows the best place to promote your music is online. It’s such a BIG place and it’s the reason why the world has become a lot smaller.

I connect with my fans via Reverb Nation, Number One Music and my FB music page mostly. From doing this I have discovered that most of my fans are in the US! I guess that makes a lot of sense as UK is pretty much just a small island.

How do you connect with your fans outside of social networks?

I connect with new and old fans at gigs and open mic nights. It’s usually them who approach me instead of the other way round and that’s more convenient for me.

There was one time when I was playing guitar for a friend at The Cottonwood Boutique Hotel in East Overcliff, Bournemouth and a waiter comes over to me after our set and tells me he’s been to a few of my gigs and heard my music for the past six months and because he likes it so much, he wanted to buy a CD off me.

I was unprepared and had not expected this but fortunately, my friend was able to give me a lift back home to get my CDs, go back to the hotel and earn £10! I was a very happy bunny but now I have learnt that I should bring my merchandise and flyers everywhere I go.