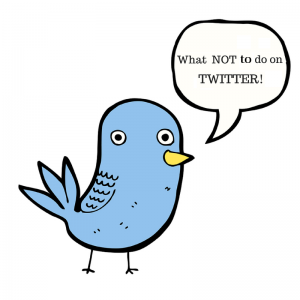 There are loads of great ways to use Twitter for outreach and online marketing strategies…  and then there are the epic meltdowns.  Sometimes celebrity and microblogging just don’t go well together.   Occasionally someone manages a rant of such breathtaking scope that they’ll probably never outlive it.

How do you avoid such a fate?  Be a better Tweeter!

Things NOT To Do On Twitter For Your Online Marketing Strategies

1 – No drinking and tweeting.

It’s never a good idea.  Friends don’t let friends tweet drunk.  It can lead to a hangover that may take months to shake off.

If someone in the industry decides to say something nasty about you on Twitter, the worst response is escalating the situation.  It just turns into a public brawl and tarnishes your PR.  As a few alternatives:

The above really only applies if you’re getting trolled by somebody who’s somebody.  If it’s a fan complaining, you should ignore it 90% of the time.  The other 10% of the time, someone may have a valid complaint that’s worth addressing politely, even if he or she is being a jerk.

Seriously, before hitting “Send,” just try to imagine what the tweet would look like on someone else’s feed.  It’s amazing how many bad posts can be avoided this way.

Unless the meltdown was truly Charlie Sheen-class levels of unhinged, it will be forgotten within 6 months, at most.  The good news about Twitter is that users have an attention span even shorter than pro-wrestling or soap opera fans.  Don’t bother deleting the tweets; just “fuhgeddaboudit” and keep on truckin’.

So, how’s Twitter working out for your online marketing strategies?  Any success stories we should know about?