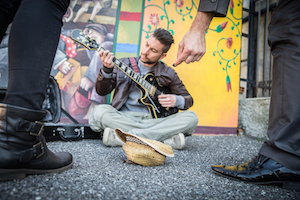 The internet has changed the indie music industry, and these days music distribution can be achieved in a vast number of ways. Most new methods involve Search Engine Optimization (S.E.O.), iTunes, or Spotify, but some artists are getting back to the basics. For example, artists are trying out street performing, a trend also known as busking. It might not be the most conventional way to advertise your music, but could it work for you?

While it may be rare, there are buskers who achieved fame and fortune. Edith Piaf was discovered singing in an alleyway outside of a Paris nightclub, and Janis Joplin, Violent Femmes, Tracy Chapman, and even Rod Stewart all started out their careers performing on the street. Ideally, you or your band perform on the street, get discovered, and rocket to stardom. However, it doesn’t always work that way – world renowned violinist Joshua Bell performed a concert in a Washington DC metro station, and of the over one thousand people who passed by, less than 30 stopped to listen. So should you consider busking? Read the following tips to find out.

In a metro station, people are busy to get to work and won’t stop for anything – even a musical prodigy. One duo in San Francisco who regularly street perform can make 100 dollars in a few hours on a Friday night, yet they only made 3 dollars in the same spot on a Monday afternoon. Your spot is the key to success. Is it quiet enough for your music to be heard? Does it have a lot of foot traffic, and space for people to stop and listen? Are you in a place where people would want to stop and listen? Are there any rules against street performing in your area? Keep track of how much money you make where, and it could pay off.

Different music genres will have more success than others – it would be hard to spontaneously put on an electronic music concert in the street. This is why most street performers you see have acoustic instruments and minimal equipment. Being portable is another important factor, as you have to set up and move to different spots.

The most successful buskers are ones that can draw a crowd for a performance. If you are very engaging and have a great set, people will stop to listen, albeit for a short period of time. Obviously, your music is the most important part of your show, and if you make great music, people will probably listen.

Busking allows you to get much closer to an audience than you would on stage, even if you were performing in a small venue. You can look people directly in the eye, they can talk to you, interact with you, and even pay you. This can lead to moments of deep personal connection with strangers, which is why the most popular and successful street performers are those who interact with an audience and involve them in their performances. If you think you would enjoy these close interactions, busking might be right for you.

Even if you don’t make a fortune performing on the street, it could be a rewarding experience, and you might even make some new connections. For more information about music distribution and indie music news and advice, follow our blog.