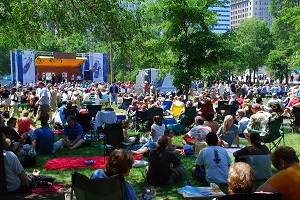 The Importance of September Music Festivals

September is one of the best months for independent musicians to perform in music festivals because it’s toward the end of the outdoor concert season. If you put on a great live music performance it may end up being more memorable to fans than shows they saw earlier in the year, as it can stay in their minds for months until festival season returns the following year. The following are points to remember why September music festivals are important in shaping music careers.

Most places around the country have fairly nice weather in September, as the summer heat begins to subside, creating a more pleasant atmosphere for music. It’s also people’s last chance to go on vacations before getting serious about work again. Doing college campus shows in September is great for helping kick off a new semester, especially for attracting new students looking for fun things to do.

The travel industry is busiest in the months of June, July and August, therefore, you’ll usually find the highest hotel rates almost everywhere you go. September, however, is when prices start cooling off with the weather, especially in tourist markets like Chicago. Consider planning a live music performance in such big cities in September, giving you maximum exposure at bargain costs.

Planning Ahead for Next Year

One of the great things about September music festivals is that they are at the tail-end of the outdoor concert season, giving you more time to plan ahead. While many bands are focused on securing slots throughout the summer, you may find less competition in your region to secure September slots at the start of the year. Still try to fill up your calendars with live music performances and remember the importance of end of summer shows.