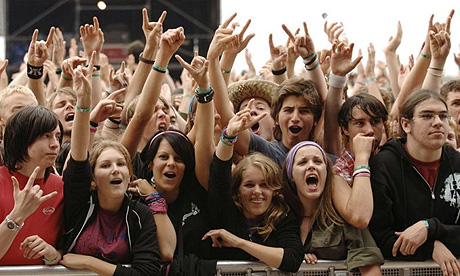 The Dawning of the Fan

I was playing gigs full time for two years before I realized I had a fan.

Two fans, actually. Not fans who are your friends or who are other musicians and their family and friends. I already had a bunch of those: family members, neighbors, bar staff and waiting staff at clubs where I regularly played. I’m talking about fans.  People, who I had absolutely zero connection to other than that they had independently come across my music and it resonated with them on such a level that they sought out gigs of mine that they could come to and listen. Without ceremony, without any social interaction between us. They would just notice a gig was on, schedule it into their busy lives, organize a baby-sitter, a ride, a place to park, and they’d come, listen, and leave.

I never noticed who was in my crowds because I would have my eyes closed most of the time. And often times while the stage or performance area is well lit the audience area is not. You sit on the stage and look out at a kind of dark grey fog. There are faces and eyes and teeth but often times it’s difficult to pick anyone out, to recognize them.

As it turned out my first independent fans were a young, handsome couple full of wit, intelligence, enthusiasm and humility.

I was packing up after one of those soulless gigs I used to play at Cafe Le Monde on Hastings Street in Noosa Heads, Queensland, Australia. It wasn’t soulless because of the natural surroundings; it was because of the attitude of the furniture and cutlery in it. Clang clack clangalang! Always LOUD, baby.

The young ladies who used to do all the work at Le Monde were efficient and lovely and yet somehow cold. I wondered why they all seemed so cold and robotic. Then on this one night as I was packing up after the gig the shift manager came over to me and said “Paul…. people are complaining that your songs are too religious.”

I said “WTF? People? You mean a group of persons? How many people? More than half?”

She said “Well, one of our regulars….”

I said: “So when you say ‘people are complaining’ what you mean is one person is complaining.”

To her credit, she smiled. I thought: “I’ve never seen her smile. She looks warm.”

Then she said: “I was listening to your last set and there were a few songs about religion and God in there…”

I remembered the last set because I had played a few cover songs in amongst my own tunes.

I said: “I’m pretty sure Knocking On Heaven’s Door, Let It Be and Bittersweet Symphony do not classify as religious songs.”

She said: “The boss thinks you should cut back on the religious messages in your own songs, too.”

I said “Your boss doesn’t have the slightest idea about any of this and if he wants to give me advice on song content then he should tell me himself….cos frankly I don’t believe it.”

Suddenly she crumpled inside. I’d called her bluff and she’d immediately folded.

She went back inside to the other cold staff.

That conversation didn’t get me down because as I was about to leave a young couple came up and bought one of my new CDs. They already had my first album, they said. And they’d been following me for two years. Coming to loads of my gigs.

I had never seen them before in my life.

When they said they had been following me the second thing that came into my head (after “I’ve never seen these people before in my life”) was “They must be….. can it be? … real, actual ‘fans’.”

“Yes,” another voice in my head said. “Certainly.”

It didn’t puzzle me that I had never noticed them sitting in the audience, or at tables enjoying drinks or food while sort of half listening because I always played all my gigs, every single song, with my eyes closed. I had developed the habit of closing my eyes while I performed because that’s what I did when I practiced at home in the closet for all those years. Closing my eyes allowed me to focus all my attention on my inner universe and hence on my performance.

Well meaning friends often pulled me aside to offer advice on the closed eyes thing.

“You got to sing with your eyes open, Paul,” they’d all say.

They’d shrug. They didn’t know exactly. It was the same with the advice on my song content and feel. “You got to write more happy songs…”

“You mean too many sad songs depresses you,” I’d respond.

Then I’d say: “Give me an example of the kind of happy song you are referring to.”

They would think a while, shift from foot to foot.

The thing with advice is you don’t have to take it. It’s just someone else’s opinion.

I only opened my eyes in between songs to remind myself that I was there. And I kept on singing my own songs, even if people misunderstood what they were about or how they should feel about them.

It did puzzle me that I hadn’t seen these actual fans while I was setting up, doing sound check, going out front for a cigarette, or talking with folks between sets. They had been invisible. Invisible, respectful, handsome, intelligent, humble and shy.

Perfect fans, in other words.

What that all meant, at least to my mind, was this: “There could be even more….”