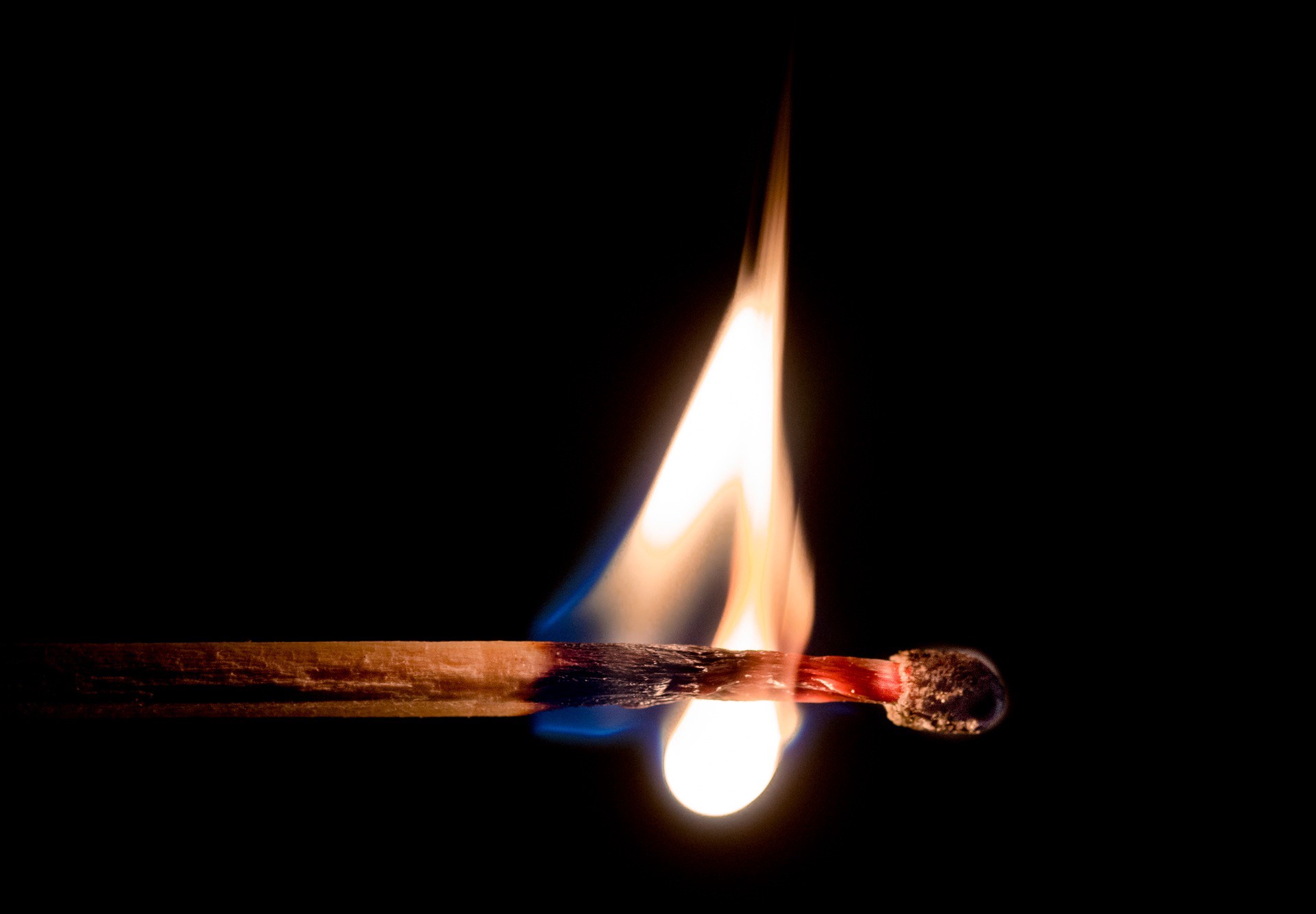 The Burnout Versus the Slow Burn: Part 1, The Burnout

I’m sure it’s different for each of us. But when I started playing guitar and certainly when I started writing songs, it wasn’t just a way to express myself. It became part of who I am. I knew at 15 or 16 that I wanted to be a person who made music for the rest of my life. (At least, that’s how I remember it now.) I had rockstar dreams of course. Don’t we all? I never made any music that had any chances of making me a rockstar so that kept me realistic. As I got older, I realized that “being a rockstar” and “making music for the rest of my life” were often at odds. If I wanted one, I needed to give up on the other.

By the time I was in my mid-twenties and in bands making interesting music, my bandmates and I had seen enough of how the music industry worked to know that there wasn’t much chance of it working for us. So we figured out ways to do what we wanted to do without needing to rely on big money. In the late 90s and early 2000s we were just on the cusp of the home recording boom of GarageBand and digital self-distribution methods. (We were still making cassettes and CDs.) So as each year passes and we get more and more tools of liberation, I’m continually stunned by how many people I meet who expect the old Major Label Rockstar Opportunity to manifest itself in their lives.

We can label these perspectives a lot of different ways: Major versus Indie, Corporate versus DIY. But I look at it this way: the Burnout versus the Slow Burn.

How the Burnout happens

To the storyteller in me, the worst thing about the burnout is what a cliché it is. It happens just the way it’s been portrayed in a thousand novels, television episodes, movies, and songs: some money men get involved, promises are made, lies are told, a record doesn’t make money or doesn’t even get released, band members get tense with each other, and it all falls apart. If you’re a journalist looking for a story, all you have to do is hang around and watch this burnout cycle occur. It’s depressing. The miraculous story is when the band pulls out of the nosedive that a major label burnout has created and releases better music. That’s incredibly rare.

Superdrag’s story is typical: after a surprise hit (“Sucked Out”), the band got to spend as much time and money as they wanted on a second album. This second album, Head Trip In Every Key, had no breakout hit. Yet, it sold something like 50,000 copies. That was a failure to Elektra though it would have been a massive success for any indie label. So Elektra put the band in purgatory: they wouldn’t release the third record because they didn’t hear a single. When the band recorded “Lighting The Way” and Elektra still didn’t bite, the band finally recognized that it was over.

“The whole dispute with the label was over a marketable single,” singer John Davis told me in 2000. “I don’t understand why that one couldn’t work.”

In the meantime, Elektra made it increasingly hard for the band to make good music.

“It was just like a total adversarial relationship, man. There was nothing happening on a friendly level; it was totally us versus them. And that’s a really shitty atmosphere to try and do music in.”

After their original bass player left and Elektra dropped them, the band spent two more years fighting to get their tapes back so they could release their third record on their own terms. And that song? The one that made Davis realize that Elektra was no longer on his side? Take a listen. It’s just as catchy as anything at the time. If that wasn’t a hit, then Elektra was deaf.

As for Slack, they went through a similar purgatory. An album they recorded with Nick Raskulinecz in a studio he owned with Dave Grohl sat in the vaults of an indie label while the band grew increasingly frustrated until their singer/guitarist quit. The super important takeaway from Slack is that the money men don’t have to be affiliated with a major label to fuck you over.

This pattern has repeated itself throughout the history of recorded music (and probably art in general). This is why I characterize the struggle as the slow burn versus the burnout. You want that flaming success? That shooting star kind of fame? That rockstar moment? Well, it comes with a price.

You can’t avoid the pitfalls

My friend and frequent bandmate, Todd Kemp, has explained our shared attitude on music deals this way: “We listened to what Steve Albini said and we believed him.”

Albini, if you don’t know, is the audio engineer (he doesn’t use the word “producer”) behind Nirvana’s In Utero, Pixies’ Surfer Rosa, Slint’s Tweez, The Breeders’ Pod, and a million other amazing albums. He’s the author of an incredibly famous article that originally appeared in Maximum Rock ’n’ Roll called, “The Problem With Music,” which details in colorful descriptions the ringer of major label music specifically and the burnout route in general. It’s absolutely essential reading for any musician who thinks that they can avoid the pitfalls of the money men. Read it if you haven’t already. Read it if you need a refresher. Go ahead, I’ll wait.

One of those bands who thought they could avoid all the major label pitfalls that Albini outlines was Spoon. Singer Britt Daniel described to Pitchfork how they worked so hard to avoid the problems when they signed to Elektra:

We’d gone into our deal with Elektra looking out for the worst, trying to not be naïve, and doing things the right way so it wouldn’t be a bad experience. But we were dropped less than four months after the record came out, and even in our worst fears we didn’t think that was going to happen. But we also didn’t think our A&R guy would completely fuck off.

He was the guy that sold us on that situation after I told him our concerns about major labels. He heard those concerns and then was a totally different guy once we signed the deal. I didn’t hear from him anymore. He really fucked us over.

Spoon wrote two songs about that A&R guy. In one of them, “The Agony of Lafitte,” I hear so much more than an indie band’s middle finger to a corporate stooge. I hear that true disappointment with themselves for falling for it all: “It’s like I knew two of you, man. / The one before and after we shook hands.” The line that gets me every time is: “After dark in a cab in L.A. / Forget about the meter, man, these are salad days.” All of us broke musicians can imagine the luxury of not worrying about cab fare. That comfort that the A&R guy offers to the band is so beguiling. I can only imagine allowing yourself to think, “yeah, let’s forget about the meter, man.”

How money plays into the Burnout

It is naïve to the point of incredulous to believe that the people who supply money for any artist to work are more concerned in that artist’s creative output than the money that output will make. When a major label doesn’t “hear a single,” that’s not an artistic concern. They’re afraid they won’t recoup the money they’ve invested.

In “The Problem with Music,” Steve Albini even runs some numbers showing bands seduced by the big advance how it’ll actually shake out. “Some of your friends are probably already this fucked,” he says at the end of the article. In anecdotes from my friends who’ve played with money, the numbers are sometimes more cruel. The advance may be higher but so is the name brand producer that the label wants to attach to the album. That producer brings his own bag of problems for the band.

None of this is in the band’s creative interest.

Labels want the band to sell the record they’ve made this year, not invest in the creative project they’ll make after a few years of maturing. Managers, lawyers, agents — they need the payout right now from the big deal.

No one is thinking long term. So you have to do that yourself.

Want your end to determine your means or vice versa?

Two of the bands I’ve mentioned — Superdrag and Spoon — managed to pull out of the nosedive that a major label deal put them in. They are outliers. Most bands end up like Slack — pressures pull them apart and they don’t recover. Slack was one of three bands in our peer group to travel to Los Angeles to make a record in 2005. None survived the fallout. Two were indie deals. One was a major. All burned out.

When the prize is something like fame (or its accoutrements — money, popularity), we’re really focused on the burnout. It’s so seductive that we may assume the ends justify the means. But if our end is a lifetime of making music (and possibly a career or at least a side hustle in it), we take more care in our means. That’s the road of the Slow Burn that I’ll discuss in the next article.