It doesn’t take long into a listen to Benjamin A. Harper’s Get Thee Behind Me before you’re enveloped by the recording’s style: atmospheric harmonies bolster the solid melodies, sparse moments belie dense arrangements, timbres trade one instrument for another. It’s a singular achievement: a solo record that doesn’t sound solo at all. You might be fooled, as I was, into thinking that Ben had assembled a new band to record this album. Yet while friends contributed to many tracks, this is definitively Ben’s solo record.

“I recorded everything at home. Every song on the record is a ‘demo,’” Ben told me.

Despite being as “solo” as records go — from the recording style to the band lineup (just Ben plus the occasional friend) to the name of the record — the songs here don’t wallow in one genre. “The Queen” lurches along with touches of Spoon’s angular rhythms. “Old Window” pretends a “rural” sound with a rusty old slide guitar introduction but incorporates big spacey harmonies like Radiohead’s OK Computer and shuffles into some horn parts and fuzzy guitar like a drunken New Orleans jazz funeral. “Wait For It” drives along with traded-off keyboard riffs that sound Hall & Oates in a battle of the bands against each other. “Not Even Half Way” throws in keyboards, guitars, and horns that might sound cacophonous if they weren’t all building the melodies and constructing the dynamics of the song.

To those who’ve followed Ben’s musical career from the Comfies to Feable Weiner to Harper to Magnolia Sons, it’s not surprising how damn musical this record is. But when you consider it was made at home, it’s eye-opening. I spoke to Ben about how the record came together, how he got the word out, and what’s next.

Having done some singles and a full length solo record recently, which method of working do you prefer? I guess I’m curious if there’s a method that fit your solo work that didn’t fit the band?

With Magnolia Sons, there are a lot of pieces involved. Although I’ve thus far done most of the writing for the band, It’s my co-creator Austin who manages all of Mag Sons’ affairs. I basically go along with whatever he wants to do and allow myself just to be a creative in the band. Magnolia Sons had also been my main thing for quite a few years so it was great to hole myself up and write/produce something completely different again. I don’t think I prefer one method over the other. I just prefer whatever works best for each project.

Could you tell me how you recorded your record? Home studio? Pro studio? How quickly did it come together?

I recorded everything at home. Every song on the record is a “demo.” I used a lot of virtual instruments, which I’d never done before. I used virtual drums for all of the tracks except one. Can you tell which one? I was able to use my computer to experiment and not have to spend time and money in a pro studio. It didn’t come together quickly since it’s just a collection of demos amassed over the last 5 years or so.

Recording at home comes with all sorts of limitations, how did you get the record to sound so polished?

I got the masterful Jordan Lehning to mix and make it sound as best it could and John Baldwin to master. They worked wonders with my demos. 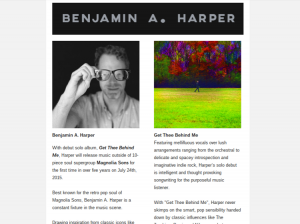 How have you gotten the word out about your solo record? Did you attempt to coordinate any publicity for the release? Are there regular promotional things you do?

I definitely tried to coordinate publicity for the record. Since it was self-released, there wasn’t much of a PR budget, so I just had to reach out to people I knew and ask them to check it out. I was pretty happy about the amount of press I received considering I was on my own!

You obviously have a press kit put together (in some degree), what have you found is the most important part of that kit for an indie artist to have?

I think it’s just important to have something prepared to send and an easy way to hear the music.

The photos look professional. Did you do them specifically for the solo record or did you already have them?

I had the photos done for the solo record. Stephen Jerkins (of The Nobility) took them.

We talked about coordinating publicity. How’d you do that? Just email local papers and journalist friends ahead of the release? Or something more?

I got a little help from Kristyn Corder at Apple Road on the press material, but yes, I just reached out to people I knew and people I knew who knew people. I got some great local press from The Nashville Scene and some great write ups in local blogs like No Country For New Nashville, We Own This Town, etc… and I managed to get a song premiere on American Songwriter’s website.

I tried sending a bunch of stuff to music blogs, but I’m not a publicist and I got zero response from anything I didn’t already have a foot in the door with.

I really liked how Magnolia Sons was releasing one song at a time. Why didn’t you go that route for your solo stuff?

I think I’d been sitting on a lot of these songs for too long. I was just ready to get these out there so I could start on whatever was next. I already have well over an album’s worth of material waiting around again! It’s definitely fun doing singles with Magnolia Sons, but I just wanted to have an LP, especially since I’d never before had a full-length record out.

Having experienced a lot of the music business, what parts of the “business” do you think it’s best to avoid? I’m wondering from the perspective that some indie musicians can burn themselves out trying to do everything the “right” way. Have you figured out what works for you? What is that?

I don’t think there is a “right” way. There is no surefire path. It’s mostly who you know, being at the right place at the right time, being prepared for opportunity, and a willingness to work ceaselessly.

Want a template for your marketing? Try what Ben did:

Benjamin A. Harper’s record Get Thee Behind Me is available on iTunes, Spotify, and Bandcamp.