Though they’d probably disagree with the characterization, The Foxymorons lead a charmed existence. Childhood friends, Jerry James and David Dewese, live in different cities, don’t play shows, and get together every few years to make a record. One year, they decided to make pyjamas instead. Through five full-length records and a various lo-fi releases, they’ve maintained a better working relationship than most bands who think it’s best to, you know, live in the same place and play together frequently.

Whether it’s pjs or fuzzy rock songs, the duo infuses their work with winning charm and a sense of play. Name-checking Gene Wilder or speak-singing the non-sequitur “the detective is behind the plants” doesn’t sound deliberately abstruse but playful. Last year’s Fake Yoga was smothered in feedback, backwards sounds, and distorted vocals. But it was never cold or mechanical. Warm melodies cut through the fuzz and made the band sound like a Lemonheads / Pavement love-child.

I spoke with Jerry about their process from writing through recording to publicizing.

The Foxymorons have an interesting writing process. How do you do it?

We usually write songs individually and share them with one another when we hang out together. The collaborative process is really fun. Songs can change a lot. It’s a pretty democratic process and the songs only get more interesting once the other guy gets his hands on it.

It’s very organic and unplanned. Usually we each sort of stockpile song ideas that we’ve been individually working on. And ideally, we think “Hey, these kind of fit together. It’s time.”

Since you live in different states, do you start tracking separately or just demo individually and do all the recording together?

David has recording gear and he’s a decent home engineer so he’ll track his songs or do overdubs on my songs. For me, it’s way more fun when we’re both in the same room tracking together. It’s just exciting to hear the songs come together, make wisecracks, drink milkshakes, and have a late dinner after a long day of recording.

How do you handle mixing and mastering?

Most of our records have been mixed by our pal Matt Pence who we’d met back around the time of our 2nd record, Rodeo City. He’s a really gifted engineer. David usually sends our record off to get mastered by someone in his network of friends.

There are no guarantees and it’s exhausting work that will make you ask “why am I doing this?”

For your last record, Fake Yoga, you had a great deal of good press. How did you coordinate that? 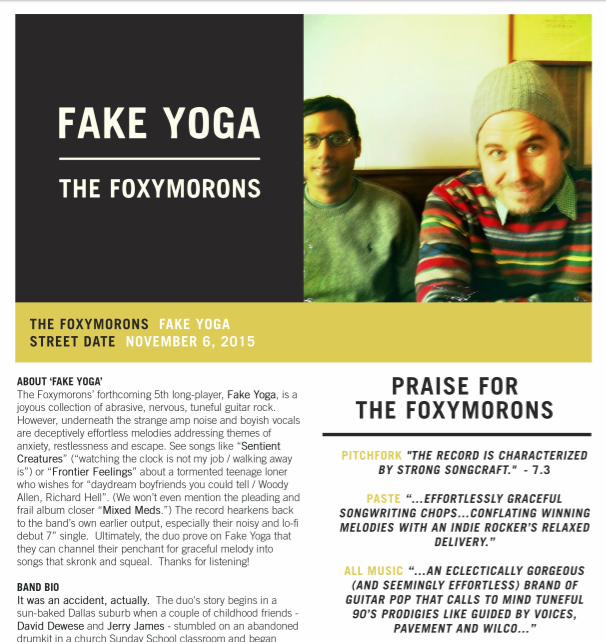 We did a lot of the typical ‘shoulds’ for making a record: We designed an eye-catching one-sheet, made a web page with press resources, etc. But since we didn’t pay a PR company to handle press, we had to do a lot of our own marketing. It was a challenge and it can be demeaning work. It’s incredibly time-consuming to find e-mail addresses for music editors, freelance writers, music blogs, radio stations, etc. And those people have inboxes that get flooded daily by PR people and bands that are more prominent than ours. I don’t know — it’s definitely a bit of a crapshoot. There are no guarantees and it’s exhausting work that will make you ask “why am I doing this?” I would have to remind myself that making a record is the most important thing. Anything else is bonus.

We carefully selected a release date by working backward. We knew that we ought to give ourselves at least 2 months of lead time for promotion and that we needed to have our one-sheet, press resources, music links, etc. ready to give ourselves a decent shot at some coverage. And we had an idea of our promotional timeline, i.e. the dates when we’d have something to announce like a new single, a new video, etc.

At some point, you just have to throw your hands up and say ‘My work is done’ and hope the right audience will find your music somehow.

How do you continue to promote the latest record (and all the previous ones) after the initial push to release it?

Well, there are diminishing returns to promoting a record after the release date has passed. Especially if you’re not playing live shows. Ideally, you ought to build on any small successes. If a press outlet or writer has covered you, perhaps they will continue to cover you if you have something new to share. But at some point, you just have to throw your hands up and say ‘My work is done’ and hope the right audience will find your music somehow.

Do you think that planned release date and coordinated effort around publicity is important for indie artists or can it be done in small amounts that aren’t organized around a release?

I think media outlets are typically more excited about a tangible news item: a full-length record, a 7″ single, a new video etc. I think people always gravitate to new music, especially if the band name, record artwork, press photos, the sound of the band all cohere in a compelling way.

Once you’ve made a record you love, it’s a success.

How do you measure the success of a record?

The most important question. We talk a lot about this. And this may be a cliche at this point, but it’s the truth: Once you’ve made a record you love, it’s a success. Any other measure will inevitably lead to bitterness and disappointment. It’s gratifying for others to like it and it’s worth it to do everything you can to get others to hear it. But you know, you can only do so much.