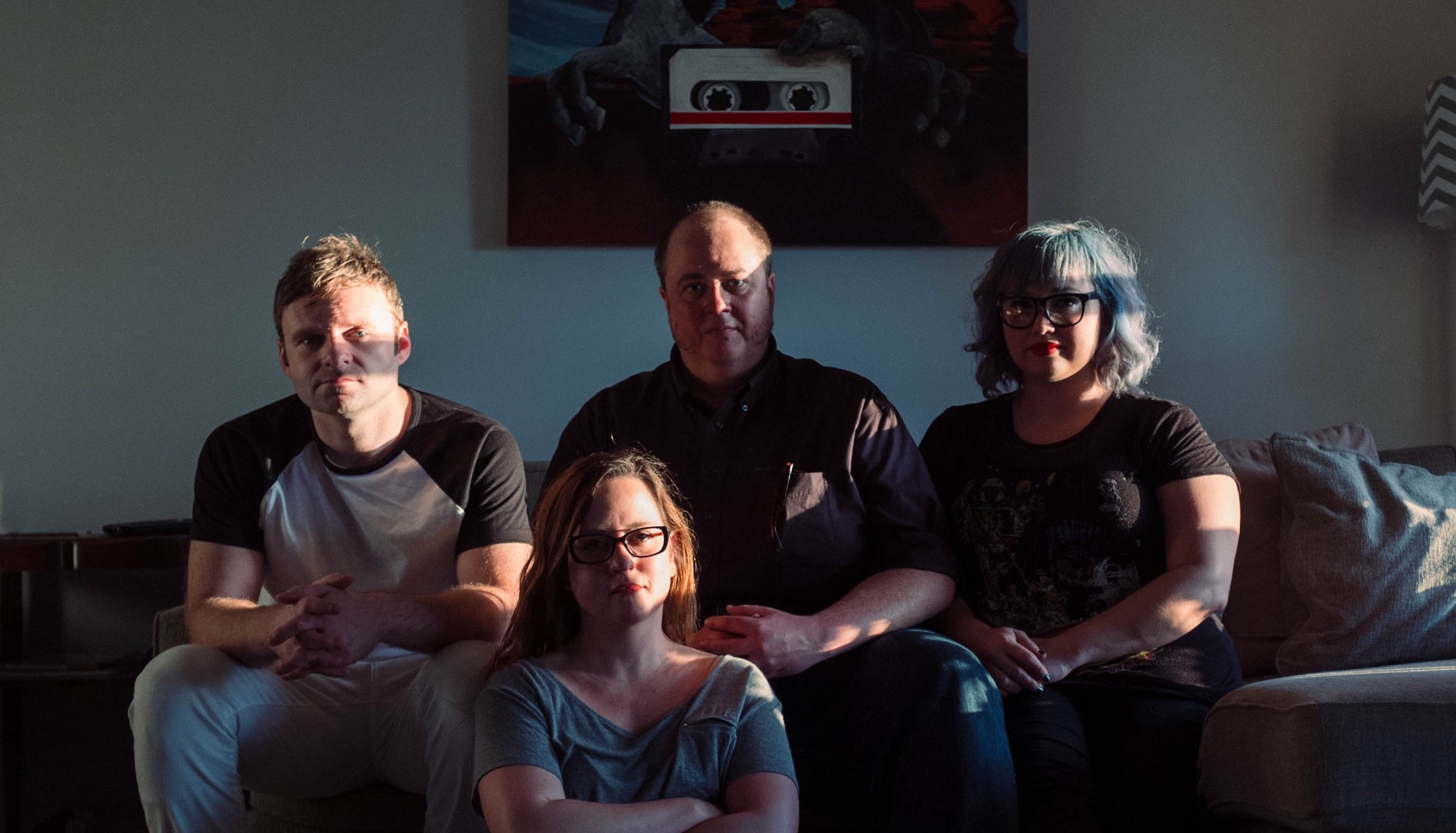 “Four old friends with eight bands and one marriage shared between them get comfortable and make music they love.”

That’s how Tower Defense describe themselves. It gives the listener a context for how this quartet of two basses, guitar, and drums simultaneously sound aggressive and friendly, precise but warm. Their new release on yk records, Stay Inside, marks a progression from their debut, Mind the Menagerie, which was recorded as a trio with no guitar.

The five tracks of Stay Inside demand repeated listens. The three voices of the guitars at times meld together to create what Mike Shepherd describes as a “Conlon Nancarrow approach” — what sounds like one, impossible-to-play instrument. But when they separate — as in the solo on “Stay Inside” — there are beautiful moments of following the three voices play distinct parts that weave back together into a layered riff.

I talked to Mike Shepherd (bass), Sarah Shepherd (bass), Jereme Frey (drums), and Currey May (guitar) about the move from trio to quartet, how they write for two basses, and this gorgeous record.

In the past couple of years, Tower Defense went from being a three piece with two bass guitars and no guitar to recording your new record as a four piece with guitar (but still two basses). How has the addition of Currey on guitar changed the writing process? How has it affected the live unit?

MIKE: Currey’s arrival in the band coincided with a shift in our writing process, with Jereme bringing a lot more compositions to the table, so we all kinda figured that out together. Usually, Jereme will have parts for the voices of the three guitars pretty well roughed out, so it’s just a matter of me, Currey, and Sarah arranging those parts, and fine tuning them to our respective strengths and playing styles. Three of the five songs on Stay Inside were written this way (“Stay Inside,” “Glyphs,” and “History”).

SARAH: Adding Currey (music-wise) made our band sound fuller, (singing-wise) harmonies are way better, (writing-wise) kinda the same. Somebody comes up with a riff and we build around that.

JEREME: For me I think this added way more opportunities from the writing
perspective but also created some road blocks. It was pretty simple writing for two primarily single note instruments. When we added guitar it became a little more difficult to know if the guitar needed to be more single note driven as well or more chord based. When I’m writing stuff I kind of try to keep everyone in a prototypical voice range. Sarah in the bass voice, Mike in the high tenor and alto, and then Currey in more of the soprano. From a vocal standpoint I think it added yet another voice and a good one at that. That addition was very natural and really opened up the melodies creatively.
From a live performance standpoint I think we have hit a really good stride. I think we are more confident now and have a pretty solid stage presence from all performers. It had some growing pains for sure but I think we are in a good spot right now.

MIKE: As for playing live, it really took us while to get that worked out. For the first few shows, we’d play most of the set as a three piece, and would just bring Currey up for the newer songs. This was really awkward, though, so we made an effort to put together a full set that we could play as a four-piece. There were some growing pains, for sure, but I feel like the end result is a fuller-sounding, more dynamic show.

The difference between Mind the Menagerie and Stay Inside is pretty stark. For starters, only one song on Stay Inside tops 2 minutes. While MTM’s songs are pretty brief, none is under 2 minutes. What changed?

SARAH: I don’t know if anything changed except for the fact we got better at writing songs. I love that our songs are short and sweet.

MIKE: We’ve always erred on the side of brevity, striving for the conciseness of bands like Wire and the Nerves, but, yeah, it was really the perfect concision of Jereme’s compositions that pushed us under two minutes. I’m not opposed to longer songs if they stay interesting throughout, but repetition for repetition’s sake has never interested me. We actually recorded a sixth song during the sessions for Stay Inside, but it was a perfect example of just too much song. I think it was close to four minutes. It didn’t fit with anything else we were doing, so we axed it.

JEREME: That is mostly my fault. I started writing some songs and basically
have a weird process and when the thing is done it’s done. So yeah, I
mostly have enough ideas for minute and a half songs.

Is there any easy way to describe how Mike and Sarah play around each other’s bass lines? Is one of you “the rhythm” and one “the lead”? How do you differentiate the basses sonically?

MIKE: Initially, we approached it as “co-lead” I think, or at least I did for the stuff I was writing. On songs like “The Register” or “The Lottery” I wanted it to sound less like two bass parts and more like a single, impossible bass part. Like a Conlon Nancarrow approach to composition for the bass. As it developed, I thought of my parts less like a second bass and more like a four-string guitar.

As for sonic separation, we honestly didn’t give it a lot of thought early on. At our first few shows, Sarah and I were both playing Jazz Basses through bass amps, and it was a muddy mess. Fortunately, we we had some friends who laid down some straight talk and helped us find some differentiation. I tuned my bass up a fourth, and started playing through guitar amp. I added some guitar pedals. Eventually, we got the sound close to where we wanted it, but we’re still fine-tuning.

JEREME: Again, I think in voices more than lead or rhythm. I kind of think of Sarah as the “Bass” and Mike as more of the “Lead” in those terms. But, I still try to use the counterpoint approach where we combine somewhat independent lines, those lines separated more in voices.

SARAH: I play in standard tuning and on some of the newer songs, I’m in drop D. I’m definitely on the rhythm side / lower end of things. Mike is playing a short scale bass tuned to A. He is in the mid range side.

What was the impetus to bring in Currey on guitar?

JEREME: Mike called and said Currey is in the band.

MIKE: There was alcohol involved . . . I had been saying for a while that I was missing guitars. I wasn’t sure what that meant, and it honestly might have just been me trying to process the writers block I ran into after we finished our first run of songs, but Currey being a close friend and previous collaborator, it seemed like the perfect fit.

SARAH: For me, it was to spice things up. I felt like there was only so much Mike and I could do before I got burned out. I currently play/have played in bands with Currey before. Love rocking with her.

With Mike and Currey playing in a similar frequency, how much do you consider the textures of the instruments in writing and playing?

JEREME: A lot. For me I try t keep everyone in ranges so there isn’t much
overlap. That’s why Currey is kind of single noting the top 4 strings
in a lot of stuff I write when it is her time to shine like in
“History” and the solo in “Stay Inside”. It also allows some pretty
thick textures when needed like the end of “Stay Inside” or most of
“Glyphs.”

MIKE: It kinda depends on the song. On some of the newer stuff we’ve written, like “Glyphs” and “Stay Inside,” the goal is to sound monolithic. In most other cases, though, she’s swinging between reinforcing the roots, following Sarah’s parts, and augmenting the leads, harmonizing with me. It’s actually pretty rare that we have more than two distinct musical atoms happening at any given time.

SARAH: Currey is either playing the same thing as me to fill the sound out or is on the higher range of things.

CURREY: I try to stay “tinnier.”

Do you think you’ve got the dream line-up right now? Or are RFTC horns coming soon?

SARAH: DREAM BAND FOR SURE!!!

CURREY: I feel like we can do a lot with the instruments we have right now. Never say never, but there’d have to be a compelling reason, I would think.

MIKE: Man, my tendency is toward inclusivity, to a fault. If I had my way, Jay would be in the band, and Beau, and we’d just play big-ass New Pornographers’ style arrangements of songs from every band we’ve ever been in. The logistics of something like that make it completely untenable, of course, and every new person you add to a collective exponentially increases the complexity of every aspect of being a band, from writing, to rehearsing, to booking shows. So, I think we’ll just stick with the four piece.

JEREME: Most of the new songs I’ve written have me playing drums and saxophone at the same time. No, this is it. For me at least. Unless Mike calls
and says someone else is in the band.

The vinyl release of Stay Inside is gorgeous. How did you end up with this dream artifact? How did yk records enable that? 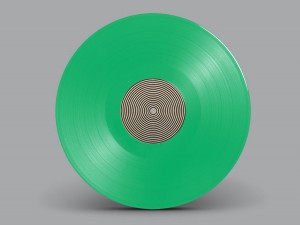 SARAH: It is gorgeous, isn’t it? I am so thrilled with how everything turned out. We are soooooo lucky to have yk records to be a part of this. Recording at Battle Tapes in about a day and a half and between Ben Smyth’s collage artwork and Todd Kemp’s liner notes…it all came together.

JEREME: Dude, we just lucked into it. Mike can elaborate more on that. I am still floored it looks and sounds so good. And the video…no way that should have turned out as good as it did.

MIKE: We had saved up enough scratch to record for a day at Battle Tapes and put out a 7″, but that was about it. After Michael [Eades of yk records] got involved, it really freed us up to make our perfect record. He pushed us to go beyond what we’d settle for, and start thinking in terms of what would make a perfect artifact. We were able to bring in Ben Smythe to do the collage on the cover, which is something I’ve always wanted to do, and doing a 10″ instead of a 7″ let us sequence the songs the way we wanted.

Is the record available on all the digital avenues as well or just vinyl and bandcamp?

MIKE: It’s everywhere, man. iTunes, Spotify, Tidal, Groove. If you want to hear it, you can.

Do you do any promotion besides playing live? Does yk help with all that PR stuff?

MIKE: Michael’s definitely been a huge help with promotion and press. He was instrumental in putting together the schedule of track releases, and pushing us to do a video. We’d love to do another video to keep pushing the record, and we’re starting to book shows out of town this summer.

JEREME: Drums. I play the drums.