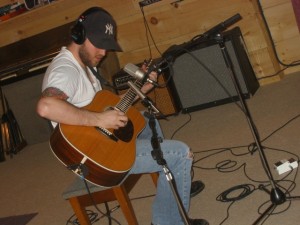 In this installment of interviews with industry professionals, we will get the inside scoop from musician and producer Chris Cubeta, owner of GaluminumFoil Productions in Brooklyn, and lead singer of the band Chris Cubeta and the Liars Club.

At his Williamsburg-based full-service recording, mixing, and mastering facility (which he constructed himself!), GaluminumFoil, he has produced records for dozens of amazing up and coming artists. Among them, Wakey!Wakey!, who charted on iTunes at #1 in the singer/songwriter category.

His band, Chris Cubeta and the Liars Club, released their third studio album this summer and are preparing to embark on a tour of Germany this Fall.

Q. What are three things indie musicians should know before their first recording session at your studio?

A. 1. We like to have fun. But you should come to our studio prepared to work hard.

2. Bringing the engineer coffee, vodka or tacos from across the street will make your recording sound better.

3. Don’t show up early! We are booked pretty tightly.

Q. What should indie musicians look for in an engineer?

A. Someone who really cares about what they are doing and treats you and your music with care.

A. The people using it. I have heard many amazing records made on very modest equipment and I have also heard really lousy recordings made at million dollar studios.

Q. What are some pros/cons about working with a smaller studio vs. a larger studio?

A. I don’t think the size of the studio matters much. I think people should work wherever they feel comfortable, both artistically and financially. Pick a studio that you believe you can be at your best while recording. Listen to recordings that were made at the studio and decide if the sound is what you’re looking for.

It’s an on-going process that I don’t think I will ever fully understand. I’m constantly learning and trying to better myself as a musician, producer, engineer and most of all as a person.

Tell us what you think! Any other tips you’d add about the recording process and the pros and cons of working with a professional producer?

Up next: How bands can benefit from Google+.