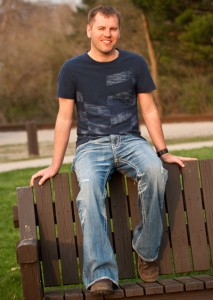 Every Thursday we’ll highlight the career and the music of a SongCast artist. Check out this week’s special Spotlight interview with SongCast Founder, Mike Wright!

What’s your first musical memory?
My oldest brother was a big fan of the infamous rock trio Rush. Late at night I would hear these melodic sounds permeating through the walls of his room into mine. When he was out I’d sneak in and sift through his vinyl records searching for these songs I was hearing. This is when I discovered Rush and tracks such as Limelight, Subdivisions and The Spirit of Radio. Since then and over the years I’ve seen the band perform no less than 20 times. I also had the opportunity to meet Geddy Lee at a Best Buy when he was promoting his solo album.

What’s your latest track or album?
Slip Away off the Breaking Free Album

What song or album do you HATE?
Honey Bee – Blake Shelton

What’s a song or album everyone should be listening to right now?
Alter Bridge – The Ghost of Days Gone By

What profession would you choose if you couldn’t choose music?
History and/or Archaeology.

Tell us more about your local music scene.
The Northside Blues Club is a great place to checkout local acts here in the Akron area. A bit further north we have Peabodies which is a very popular venue to discover new bands coming out of Cleveland. Some very notable artists from our area are:

As a performer, what would be your ‘perfect’ live experience?
Performing at Blossom Music Center in the summer would be my perfect live experience. It’s a large outdoor amphitheater located here in Cuyahoga Falls where all the major acts stop on their summer tours. This would be an amazing live experience topped off by having all of my family and friends come out. It would also be the perfect venue to host the SongCast corporate picnic, followed up by live performances of only SongCast artists!

What aspect drew you to the particular genre of music that you now perform/write?
My brothers were both in music and played the guitar. When they stopped playing I got the “hand-me-down” instrument and fell in love with seeing how distorted and loud I could make their guitars go.

Share one personal event in your life that greatly influenced a song/album that you have created during your musical career.
I wrote a song called “In Flight” shortly after the passing of a friend many years ago. The basic idea of the song was that even though our loved ones are gone, they’re still always apart of us.

Here’s a snippet of the lyrics…

Tell us the story behind why you started SongCast.
As an Indie Artist and songwriter I wanted to discover the “secret” art of music distribution for my own band. I began by contacting companies such as iTunes to determine how to get our tracks listed with their services. After many frustrating emails it became apparent they only worked with labels and aggregators representing hundreds (even thousands of artists). So it was time to start my own company! We began by recruiting bands on MySpace who wanted to be on iTunes. It didn’t take long before we had over a hundred artists sign up with us. Shortly after I went back to iTunes with a list of artists who we were now representing and then they signed us to a deal. This gave us leverage to approach other companies such as Rhapsody, Emusic, Amazon, etc, and we eventually got deals with all of the major music services. The rest is history…